?
Ozen "The Immovable" is a character in the animated series Made in Abyss

Ozen is an extremely tall and thin woman who is more than 2 meters tall. She has a black and white hairstyle with a strange shape that has a special style to hide the deformations of the scalp caused by prolonged exposure to the curse of the abyss. Her eyes are black and do not reflect the light, giving him a disquieting look. When fully equipped to go deep, she wears a voluminous armor and a disc-shaped hat that covers her eyes. [1]

Its white whistle is adorned with a pair of horns, which resembles the image of an ox.

Interaction with her height

Apparently she is represented as an ox (male of the cow), so that her tall stature may be due to this. In the anime she interacts with several children, sometimes she can show herself as if she were her mother.

Among the official art of the anime you can find an image with all the characters of the anime as a comparison of heights. According to this image it is said that Ozen is the highest character of the anime being higher than all the male characters in the series. 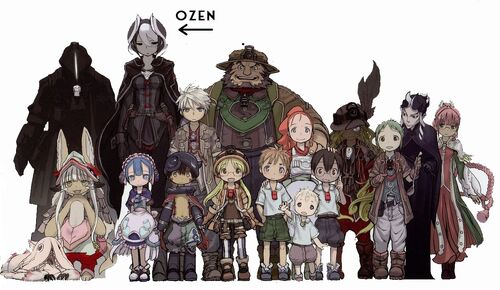 The Cheese Touch is a game mainly played at Westmore Middle School throughout the year. It is the overarching antagonist of the Diary of a Wimpy Kid series. If somebody has the Cheese Touch, they will be a social outcast until they pass it onto someone else by touching them, which is pretty difficult, as the main rule of the game causes no one to go near the person. The movie diary states that the Cheese is the overarching antagonist of Diary of a Wimpy Kid and its movie adaptation.

Diary of a Wimpy Kid

Towards the end of the first book, Greg and Rowley Jefferson are confronted by a group of teenagers they ran into on Halloween night, who end up forcing Rowley to eat the Cheese--they were going to make Greg and Rowley split it, but Greg was able to get out of it by claiming he was allergic to dairy. After Rowley was forced to eat the Cheese, kids at school the next day noticed that it was gone and started coming up with theories as to what happened to it. Greg ultimately kept his mouth shut about what happened to him and Rowley, and eventually claimed to the other students that he ended up throwing it away, which freaked them out because by saying that, Greg technically has the Cheese Touch.

When Greg returns to school, he notices that the other students behave strangely around him (i.e. running away from him). He realizes that he still has the Cheese Touch from last year and that he had forgotten about it over the summer. Greg is initially worried that he will be stuck with it the whole year, as no one will come within thirty feet of him, but is able to pass it onto a new kid in his homeroom named Jeremy Pindle. It is not known what happened to Jeremy after he got the Cheese Touch.

Diary of a Wimpy Kid: Double Down

In Double Down, Greg reveals that there's still a stain on the ground where the Cheese used to be. According to him, some students have tried starting up the Cheese Touch again though teachers have done their best to stop it from happening. One student snuck a slice of roast beef on where the cheese used to be and tried starting something called the "Roast Beef Touch", but it didn't have the same effect as the "Cheese Touch" and never came to be.

Diary of a Wimpy Kid (film)

In the Diary of a Wimpy Kid movie, according to Chirag Gupta, the Cheese Touch’s history is slightly changed. Instead of Abe Hall, the student it is passed into before it dissipates for most of the book, the film has a German exchange student named Dieter Muller take the Cheese Touch and move back home to Düsseldorf.

Eventually, Rowley is forced to eat the cheese by the teenagers. When confronted, Greg takes the fall for eating the cheese, picks it up and has a powerful speech about the state of the school in place of his much more underwhelming reaction in the book. Despite this, the end result is the same: everyone is in consensus that Greg has the Cheese Touch and they scatter, all because of Patty. Afterwards, Greg picks up the cheese again and throws it away, before he and Rowley walk home together as they both have the Cheese Touch.

Near the end of the movie, as everyone gets their yearbook, Patty avoids Greg as she didn't want to get the Cheese Touch. She then hugs Rowley and gives him his yearbook. Both Rowley and Greg smile as since Patty hugged Rowley, he secretly passed his Cheese Touch to her, though Greg still has his.

In the film, Greg mentions to Rowley that he passed his Cheese Touch to Jeremy Pindle, as he's the new kid. Later, the stain where the cheese was is shown.

Instead of Chirag telling Greg about the story of the cheese touch, Rodrick tells him.

This is a list of people who are known to have had the Cheese Touch at some point.