View source
watch 01:36
We're Getting Mutants in the MCU - The Loop
Do you like this video?
Play Sound

"Kirari may be tall, but she really loves cute things. On the inside, she’s more “girly” than anyone else. She can make her own clothes too, showing a hidden dextrous side to her. Her dream is to shine and be loved by everyone, so she came upon the world of idols. Kirari now grows even taller."
―THE iDOLM@STER: Cinderella Girls, Anime Idol Profile

Moroboshi Kirari is a character belonging to the THE iDOLM@STER franchise. She is the tallest female character in the franchise (before, she was the highest absolutely).

Kirari has long, wavy orange-brown hair and large brown eyes. She has very long eyelashes. Kirari is usually smiling, and her mouth is always curved like a cat. Kirari loves to wear bright and colorful clothing with lots of accessories and is rarely ever seen without her three star-shaped hair clips, or a colorful bracelet.

Kirari is an idol under 346 Production, under the passion category. She became one of the most popular Cinderella Girls immediately for her contagious energy and comical quirks. She delights in spreading her own madness in ordinary life, or as she calls it, "Kirarin Power ☆". Kirari speaks quite fast and tends to splash her speech with meaningless words in general, but those who know her best are "nyowa ☆", "Happy-Happy" and "Puu-Puu".

Kirari is the tallest female character in THE iDOLM@STER, even taller than the Takagis and some of the male idols, and continues to grow taller after training. Kirari started at 182 cm before growing to a height of 185 cm. A communication in Starlight Stage has her claim that her height makes her self-conscious, and that is why she started wearing cute clothes. However, she overcomes her insecurity once she grows as an idol and prides herself on her height. She says she can grow even more with the love of her fans.

Because it is extremely rare for Japanese native women to be so tall, Kirari has become popular among Japanese fans. It is common to see her depicted as a giantess in fan art.

Until Jiro Yamashita was introduced, she was the tallest character in the series (the tallest is now Amehiko Kuzunoha). 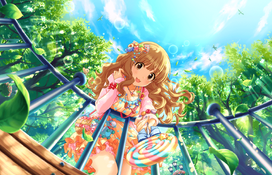 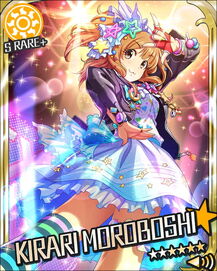 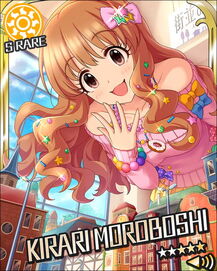 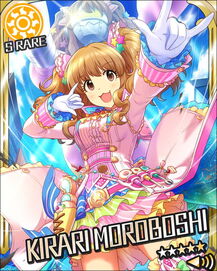 Behind she there is a mecha (obviously giant) with her same appearance. 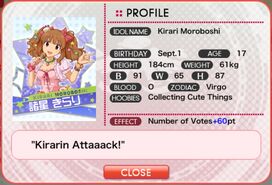 Here it is mentioned that her size is 184cm, 1cm less than her final size 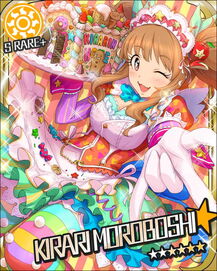 Para-GTS: If you notice, there is a miniature version of her on the cake.

...inside the GTS community

Her reception is null. Almost never mentioned to her within the community, in fact, only one fanart made by an artist related to the GTS community is known. On the other hand, other characters of the franchise are mentioned, being Anzu Futaba the most included in GTS fanarts.

...outside the GTS community

On the other hand, those who are not interested in the matter of the size difference, have made more references to this character than the GTS community itself as a giantess. For example:

In that game they have dedicated a card to her as a giantess. The description says:

"Kirari is a young girl who arrived to this world with Mio Honda and Mika Jougasaki. After plucking up a primal crystal from the forest ground, she grew to a gigantic size, sprawling the town. She's particularly fond of Vyrn and uses any opportunity to grab him close."
―Granblue Fantasy[[Source]]

She appears in 2 ways: