?
Ichijō Hotaru is one of the main characters of the anime series Non Non Biyori.

She is a girl with black hair, brown eyes and white skin. Also your body feels very developed for your age.

Interaction about her height

She is very tall compared to the average height of girls her age in the world (144cm). It is said that this is because she is a city girl (she is originally from Tokyo), but this could be false since on average Asian women are very short in stature.

Changing the subject, other characters in the series interact with Hotaru's stature:

Komari is a teenager of short stature (measures 136cm aprox.). She is very close to Hotaru, even Hotaru appears more along with Komari than with another character in the series.

Within the series are often parodies with respect to the stature of both, from Komari mistaking Hotaru as an adult woman as Hotaru watching over her as if Komari were a "girl". On occasion, Komari becomes depressed several times when she sees Hotaru's overdeveloped body, as well as in situations where she is seen by an infant.

Komari confusing Hotaru with an adult.

Natsumi is a preteen girl who also appears in the series. His height is 155cm, a stature that is within the absolute average, therefore, is not considered high, but for the place where she lives, it could be considered high.

He does not usually live with Hotaru much (he does it more along with his sister Komari and with Renge Miyauchi), but you can always notice her being a little shorter than Hotaru in many scenes of the series, even in one scene, Hotaru proves to be more strong that she in a game of pulse beating her in less than 1 second.

It is too rare that Hotaru's mother is present in the series, but in the few scenes that appear with Hotaru, it can be shown that Hotaru is about to reach her mother's height. 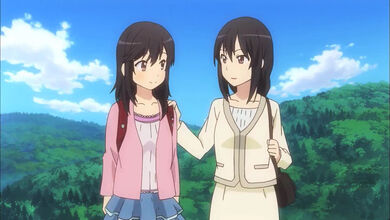 Although Hotaru is growing, she will not have much time to reach her mother in stature.

In the fandom of the series circulates an image where the stature of the protagonists is shown. This table shows that Renge Miyauchi, the girl with purple hair, measures 134cm, which is a stature well above the average for her age (7 years). This is completely wrong, since her height is approximately 115cm, this doing calculations from Photoshop.

The following images are evidence of the error of the image: 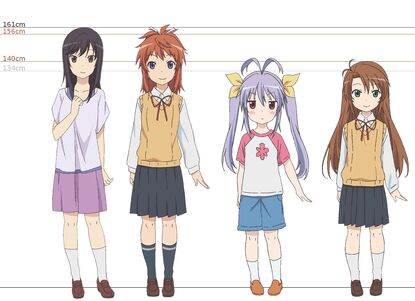 Image showing the wrong height of Renge Miyauchi (the purple haired one). 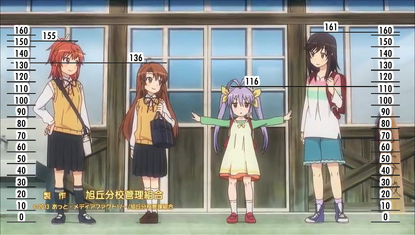 Statures of the protagonists of the series calculated via Photoshop.
Community content is available under CC-BY-SA unless otherwise noted.
Advertisement